[av_textblock size=” font_color=” color=”]
Mental health covers a broader range of life than we think.  How we act, think, and feel are all products of our emotional and psychological well-being.  It directly impacts how we make decisions, handle stressful situations, and how well we function in our interactions with others.  So it certainly follows that mental health is essential at every stage of life.

Cognitive Behavior Therapy (CBT) is a way to treat people with mental disorders that are impairing their ability to live healthy lives.  It focuses on helping clients understand their illness, teach them strategies, and empower them with the tools to deal with those things in their life that cause them stress and anxiety. And now with the internet there is the possibility of Online Mental Health Therapy in addition to the traditional face to face option.

One in five Americans experiences a mental health problem in any given year. Many people suffer from their symptoms in silence. The stigma that surrounds mental health issues prevents many individuals from getting the help they need. Moreover, until the myths surrounding the effects and treatments of mental illness are debunked there will continue to be much unnecessary suffering. 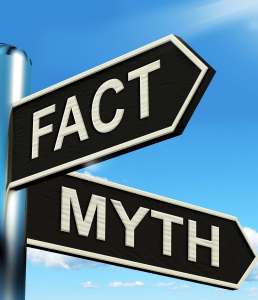 Fact: This myth probably originated in the movies that exploit mental illness for its dramatic effect. The fact, however, is quite the opposite. Most people with mental health problems are more likely to be the victim than the perpetrator of violence. Within the parameters of their illness, those with a mental disorder are no less predictable than others, and no more of a threat.

The media also highlights the drama of mental illness, often in a headline about a mass shooting or an incidence of domestic violence. Although the portrayal of violent criminals is frequent that they are mentally ill, most people with mental health problems are not violent. The reality is that only 7.5% of crimes are a result of mental illness.

Fact: It is hard to separate the symptoms of a child’s psychiatric disorder—impulsive behavior, aggressiveness, or extreme shyness, for example—from a child’s character and personality. However, mental illness is illness, and like diabetes is not an indication of weakness. For example, girls with anorexia are often blamed for starving themselves, but in reality, their distorted image of their body and the obsessions that are responsible for their behavior often can be traced to genetic and biological sources.

Confusing mental illness with weakness leads some to believe that a child can manage a psychiatric disorder through sheer willpower alone. However, disorder is not mild anxiety or a dip in mood. It is severe distress and dysfunction that affects child’s entire life and requires intervention whether face to face or through Online Mental Health Therapy.

It takes more than willpower to overcome a mental disorder. Just like no one would expect to heal a broken bone without medical attention, children may not be able to recover from their mental disorder without outside help. Fact: Early childhood could be ideal for treatment as research shows that the first few years during which symptoms of psychiatric disorders appear is a “window of opportunity” —when either traditional treatments or Online Mental Health Counseling are most successful.

In other words, early identification followed by therapeutic intervention can enable kids to reverse, arrest, or at least control, their symptoms before they suffer the stigma and adverse effects of a fully developed psychiatric disorder.

Treatment depends on the individual and could include medication, therapy, or a combination of both. Current thinking is that the treatment of choice for most children and teens is Cognitive Behavior Therapy.

Cognitive Behavior Therapy focuses on altering the thoughts, feelings, and behaviors that are causing the client serious problems.  What’s more, it has become an essential component of some of the most exciting, innovative and effective new treatment plans for kids.
[/av_textblock]